When I was young, I was diagnosed with dyspraxia. Dyspraxia is a developmental coordination disorder that affects your movement and mental coordination. It doesn’t affect your intelligence, but it can make daily life hard at times like daily living skills like making meals, writing and at times personal organisation. It can also affect social skills.

I do struggle with the little things like tying my shoelaces (I prefer slip-ons or Velcro), or with belts or sometimes I might have my shirt inside out without realising – it’s common behaviour for those with dyspraxia. I also think there are positives about having dyspraxia – I believe it has given me unique skills and identity.

In my last primary school years, I didn’t want dyspraxia stopping me from achieving my goals. My passions were performing arts and script writing. I didn’t achieve many GCSE’s the highest I ever got was a D (I retried my English exam in college and still got the same result but it didn’t affect my credentials to get into further education). I achieved good BTEC’s in performing arts and travel and tourism which I also enjoy, as I am grateful to have a family that takes me travelling.

After school I went to college to study Performing Arts. I was struggling in level 1 and my teacher wasn’t sure if I could handle it. I felt like this was my one chance to express myself and become more confident and involved with performing arts but feared I wouldn’t get to level 2. However, my class was like a family, we were passionate and worked as a team. Improvisation games helped us gain confidence and develop acting skills.

The next year, on prize day it was unforgettable. I was awarded ‘Most Improved Student’ in front of boxer Barry McGuigan MBE. I felt overwhelmed with excitement and hugged my mum. A year before I could not have imagined finishing level 2 let alone getting a big award!

Though I continue acting with a mental health theatre organisation, I decided to take a new path with media, another interest I want to evolve I could make a career of in the future.

After college, I started studying media at the University of Gloucestershire. In the first few months I found it difficult to settle in and found the workload challenging. I failed some assignments and started thinking I should quit University and isolate myself. However, with support from friends, family and my housing advisor, I overcame this setback and my doubts. A few months later my grades were improving, and I began embracing university life.

A few years later, after many setbacks and all-nighters in the library (with the occasional Dominos), I managed to direct and edit my own short film and graduated with a 2.2. University degree! It was such a big relief.

Having a University degree doesn’t guarantee your dream job, but I have had some great opportunities. For example, I had a work placement on a BBC Drama called The Trial of Christine Keeler which was filmed in Bristol and based on the ‘Profumo Affair’ scandal in the 60s. I still want to pursue in a career in tv/film and will have my own filming equipment soon.

These achievements and accomplishments like the award and the degree reflect what can be possible if you believe yourself. Hard work pays off, even if you have disabilities. Celebrities such as Daniel Radcliffe and Cara Delavigne haven’t let dyspraxia stop them!

My next goal is to learn to drive. Even if it’s an automatic license and takes five tests I’m ready for it! 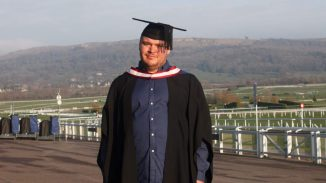